"Do not scratch your itch. Ever."

Nonetheless, yesterday a tweet in my feed got me riled.

The tweet apparently came from an audience member in a talk Aguirre was giving in Antwerp, Belgium. [update: via Twitter, Aguirre implied that I took her words out of context, since she says the talk was not about eczema.]

Aguirre has tweeted the "don't scratch"/eczema message a couple times that I've seen, so my conclusion is that she believes it.

For the record, Aguirre does understand that eczema is a complex problem with many causes and treatments. If you like 17-minute YouTube videos, she's got one for you.

But “don't scratch”? That would be nice. I've spent my whole life trying to pull that off.

With my customary tact, I made my opinion known. Aguirre replied. My man Gary beat me to the punch. 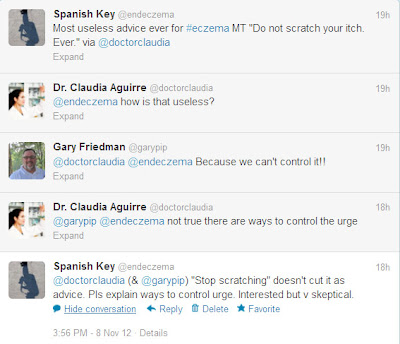 The problem: you can TELL someone not to scratch, but it doesn't work. It’s not that you won’t stop, it’s that you can’t stop. Google "eczema don't scratch" and the results fall into two main categories: pages advising you not to scratch your eczema, and pages from outraged eczema patients and parents saying that this is bullshit. (See this recent discussion on the NEA forum.)

Not only does it not work, telling people to stop scratching makes them feel bad. They already suffer from the itch, sores, and shame of eczema; now you’re telling them they don’t have any self-control. They then believe it’s their fault they look and feel the way they do.

The urge to itch in cases of extreme eczema is so intense that willpower is no defense. Not to mention that willpower is irrelevant while you're asleep, which is when many patients scratch.The intensity of eczema itch is hard to believe. I know, because I and my daughter have eczema, and when she’s itchy and I’m not, I can hardly understand what she’s going through. But when I’m itchy, it’s like a demon has possessed me, like Linda Blair’s character in The Exorcist.

So is it possible to exorcise the demon?
Dr. Aguirre, you say it’s possible for eczema patients to stop scratching. Would you mind telling us how?
Posted by Spanish Key at 4:53 PM

Science writer in the San Francisco Bay Area. My family and I live with eczema. Donate to the National Eczema Association to fund research leading to a cure!

This blog represents my personal views. I am not a qualified medical practitioner. For proper diagnosis and treatment seek the advice of a physician.