Product review: CLn Bodywash, the "bleach bath in a can"

A PR firm retained by TopMD Skin Care, a Dallas-based startup company, approached me about reviewing the company's first product: CLn Bodywash, which has been described as a bleach bath in a can. 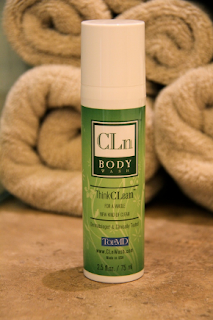 CLn Bodywash, the company says, was designed to treat bacterial infections of the skin, such as acne and the staph infections that often accompany eczema. The product comes in a small can like shaving cream--when you squeeze it out, it's a gel that you're supposed to rub into a lather and apply in the shower. It contains sodium hypochlorite (bleach) plus some unspecified surfactants, which essentially means detergent.

The idea of bleach baths makes sense to me. That's why I took them up on their offer.

They sent me two bottles in the mail. I like getting free stuff, so this was cool. The thing is, when you get something designed to treat a staph infection, you have to sit around and wait until you get one.

But I have eczema, so that didn't take long. This was the first time in my life I welcomed an outbreak of folliculitis. (Sorry, TopMD, I know you wanted me to test this on my three-year-old daughter, but that ain't gonna happen!)

CLn Bodywash foams up to a less-exciting degree than shaving foam. For me, it was a little bit stringy, like mucus, at first. But you can get it to lather. Then you leave the lather on for 1-2 minutes and rinse.

I used it on some mild folliculitis which appeared first on my left leg. Then, a couple days later, I got it on my right leg too. My first instinct was to use my right leg as an untreated control of sorts. But I hate folliculitis and want it to go away, so I used CLn on both legs.

And my folliculitis went away within a few days. It has not yet returned.

Was this because of CLn? Maybe. In the past, my folliculitis has always gone away. What goes up usually comes down.

On the plus side: CLn didn't make things worse; it didn't dry my skin out unduly; and it didn't smell all perfumy, as so many skin products do.

The obvious place to look for "proof" of whether CLn works is a clinical trial. TopMD claims that CLn has been subject to "extensive clinical testing." I found no evidence of this on the web, and asked the PR firm to send me the link. They kindly sent me a poster that had been presented earlier this year at a conference. The poster describes how the authors tested CLn on 11 subjects (all kids--this is clearly meant for kids) and appears to show that their skin infections largely cleared up.

The thing is--unless I am reading this wrong--the authors were about as scientific as I was. There is no control group, which is one of the most basic requirements for a clinical trial. There is nothing to compare the results to.

The PR rep tells me that there is another clinical trial of CLn just getting started in Houston. [updated 10/30/12]

Until the results of this presumably larger and more rigorous trial come out, I hesitate to recommend CLn Bodywash. I like the idea behind it, but I am not convinced it is any better than a decent soap.
Posted by Spanish Key at 4:45 PM

Science writer in the San Francisco Bay Area. My family and I live with eczema. Donate to the National Eczema Association to fund research leading to a cure!

This blog represents my personal views. I am not a qualified medical practitioner. For proper diagnosis and treatment seek the advice of a physician.